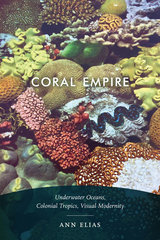 From vividly colored underwater photographs of Australia's Great Barrier Reef to life-size dioramas re-creating coral reefs and the bounty of life they sustained, the work of early twentieth-century explorers and photographers fed the public's fascination with reefs. In the 1920s John Ernest Williamson in the Bahamas and Frank Hurley in Australia produced mass-circulated and often highly staged photographs and films that cast corals as industrious, colonizing creatures, and the undersea as a virgin, unexplored, and fantastical territory. In Coral Empire Ann Elias traces the visual and social history of Williamson and Hurley and how their modern media spectacles yoked the tropics and coral reefs to colonialism, racism, and the human domination of nature. Using the labor and knowledge of indigenous peoples while exoticizing and racializing them as inferior Others, Williamson and Hurley sustained colonial fantasies about people of color and the environment as endless resources to be plundered. As Elias demonstrates, their reckless treatment of the sea prefigured attitudes that caused the environmental crises that the oceans and reefs now face.
AUTHOR BIOGRAPHY
Ann Elias is Associate Professor of the History and Theory of Contemporary Global Art at the University of Sydney, author of Camouflage Australia: Art, Nature, Science, and War and Useless Beauty: Flowers and Australian Art, and coeditor of Camouflage Cultures: Beyond the Art of Disappearance.
REVIEWS