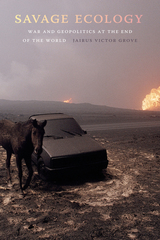 Jairus Victor Grove contends that we live in a world made by war. In Savage Ecology he offers an ecological theory of geopolitics that argues that contemporary global crises are better understood when considered within the larger history of international politics. Infusing international relations with the theoretical interventions of fields ranging from new materialism to political theory, Grove shows how political violence is the principal force behind climate change, mass extinction, slavery, genocide, extractive capitalism, and other catastrophes. Grove analyzes a variety of subjects—from improvised explosive devices and drones to artificial intelligence and brain science—to outline how geopolitics is the violent pursuit of a way of living that comes at the expense of others. Pointing out that much of the damage being done to the earth and its inhabitants stems from colonialism, Grove suggests that the Anthropocene may be better described by the term Eurocene. The key to changing the planet's trajectory, Grove proposes, begins by acknowledging both the earth-shaping force of geopolitical violence and the demands apocalypses make for fashioning new ways of living.
AUTHOR BIOGRAPHY
Jairus Victor Grove is Associate Professor of Political Science and Director of the Hawai‘i Research Center for Future Studies at the University of Hawai‘i at Mānoa.
REVIEWS
-- Bonnie Honig, author of Public Things: Democracy in Disrepair


Acknowledgments  ix
Introduction  1
Aphorisms for a New Realism  29
Part I. The Great Homogenization
1. The Anthropocene as a Geopolitical Fact  35
2. War as a Form of Life  59
3. From Exhaustion to Annihilation: A Martial Ecology of the Eurocene  79
Part II. Operational Spaces
4. Bombs: An Insurgency of Things  113
5. Blood: Vital Logistics  139
6. Brains: We Are Not Who We Are  159
7. Three Images of Transformation as Homogenization  191
Part III. Must We Persist to Continue?
8. Apocalypse as a Theory of Change  229
9. Freaks or the Incipience of Other Forms of Life  249
Conclusion. Ratio feritas: From Critical Responsiveness to Making New Forms of Life  273
The End: Visions of Los Angeles, California, 2061  281
Notes  285
Bibliography  317
Index  341