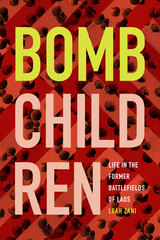 Half a century after the CIA's Secret War in Laos—the largest bombing campaign in history—explosive remnants of war continue to be part of people's everyday lives. In Bomb Children Leah Zani offers a perceptive analysis of the long-term, often subtle, and unintended effects of massive air warfare. Zani traces the sociocultural impact of cluster submunitions—known in Laos as “bomb children”—through stories of explosives clearance technicians and others living and working in these old air strike zones. Zani presents her ethnography alongside poetry written in the field, crafting a startlingly beautiful analysis of state terror, authoritarian revival, rapid development, and ecological contamination. In so doing, she proposes that postwar zones are their own cultural and area studies, offering new ways to understand the parallel relationship between ongoing war violence and postwar revival.
AUTHOR BIOGRAPHY
Leah Zani is a Junior Fellow in the Social Science Research Network at the University of California, Irvine.
REVIEWS
-- Ann Laura Stoler, author of Duress: Imperial Durabilities in Our Times


-- Joshua O. Reno, author of Waste Away: Working and Living with a North American Landfill