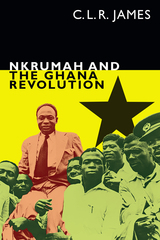 In this new edition of Nkrumah and the Ghana Revolution, C. L. R. James tells the history of the socialist revolution led by Kwame Nkrumah, the first president and prime minister of Ghana. Although James wrote it in the immediate post-independence period around 1958, he did not publish it until nearly twenty years later, when he added a series of his own letters, speeches, and articles from the 1960s. Although Nkrumah led the revolution, James emphasizes that it was a popular mass movement fundamentally realized by the actions of everyday Ghanaians. Moreover, James shows that Ghana’s independence movement was an exceptional moment in global revolutionary history: it moved revolutionary activity to the African continent and employed new tactics not seen in previous revolutions. Featuring a new introduction by Leslie James, an unpublished draft of C. L. R. James's introduction to the 1977 edition, and correspondence, this definitive edition of Nkrumah and the Ghana Revolution offers a revised understanding of Africa’s shaping of freedom movements and insight into the possibilities for decolonial futures.
AUTHOR BIOGRAPHY
C. L. R. James (1901–1989), a Trinidadian historian, political activist, and writer, is the author of Beyond a Boundary, World Revolution, 1917–1936: The Rise and Fall of the Communist International, and other books, all also published by Duke University Press.
REVIEWS
“This little-known text holds a well-kept secret: Ghana was far more important than Haiti in transforming C. L. R. James’s theory of revolution. Leslie James’s illuminating introduction situates the book within a broader radical Pan-African context. Assembled from over a decade of critical observation, Nkrumah and the Ghana Revolution demolishes the myth of the beneficent West and reveals the perils and possibilities of Africa’s postcolonial revolutions to chart a socialist future for the world.”

“Nkrumah and the Ghana Revolution helps bring into focus a key feature of C. L. R. James’s intellectual preoccupations from the mid-1940s into the 1960s: how he thought about Africa and African independence for a decolonizing Caribbean. A fulsome portrait of his political thought.”

-- Minkah Makalani, author of In the Cause of Freedom: Radical Black Internationalism from Harlem to London, 1917–1939