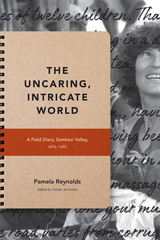 In the 1950s the colonial British government in Northern and Southern Rhodesia (present-day Zambia and Zimbabwe) began construction on a large hydroelectric dam that created Lake Kariba and dislocated nearly 60,000 indigenous residents. Three decades later, Pamela Reynolds began fieldwork with the Tonga people to study the lasting effects of the dispossession of their land on their lives. In The Uncaring, Intricate World Reynolds shares her field diary, in which she records her efforts to study children and their labor and, by doing so, exposes the character of everyday life. More than a memoir, her diary captures the range of pleasures, difficulties, frustrations, contradictions, and grappling with ethical questions that all anthropologists experience in the field. The Uncaring, Intricate World concludes with afterwords by Jane I. Guyer and Julie Livingston, who critically reflect on its context, its meaning for today, and relevance to conducting anthropological work.
AUTHOR BIOGRAPHY
Pamela Reynolds is Professor Emerita of Anthropology at Johns Hopkins University, Honorary Professor at the University of Cape Town, and author of War in Worcester: Youth and the Apartheid State.

Todd Meyers is Associate Professor of Anthropology at New York University, Shanghai.
REVIEWS
“Pamela Reynolds's ethnography-diary The Uncaring, Intricate World elegantly captures the vicissitudes of life in a setting of breathtaking sunsets, stunning moon rises, brutal gusts of night wind, and the ceaselessly annoying high pitch of the mosquito's whine. In the pages of this wonderful book she presents a complex cast of memorable characters whose life challenges underscore both the fragility and resilience of the human condition as well as the small pleasures of sipping brandy after a long day of being-in-the-world.”

“The dated entries in The Uncaring, Intricate World bring into view not what is hidden and occult but what is before our eyes. Pamela Reynolds's writings are renowned for showing us that children haunt anthropological texts even as they go unacknowledged—yet this book adds an entirely new dimension to Reynolds's work by revealing the child who hides in the anthropologist.”