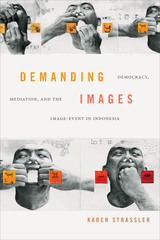 The end of authoritarian rule in 1998 ushered in an exhilarating but unsettled period of democratization in Indonesia. A more open political climate converged with a rapidly changing media landscape, yielding a vibrant and volatile public sphere within which Indonesians grappled with the possibilities and limits of democracy amid entrenched corruption, state violence, and rising forms of intolerance. In Demanding Images Karen Strassler theorizes image-events as political processes in which publicly circulating images become the material ground of struggles over the nation's past, present, and future. Considering photographs, posters, contemporary art, graffiti, selfies, memes, and other visual media, she argues that people increasingly engage with politics through acts of making, circulating, manipulating, and scrutinizing images. Demanding Images is both a closely observed account of Indonesia's turbulent democratic transition and a globally salient analysis of the work of images in the era of digital media and neoliberal democracy. Strassler reveals politics today to be an unruly enterprise profoundly shaped by the affective and evidentiary force of images.
AUTHOR BIOGRAPHY
Karen Strassler is Associate Professor of Anthropology at Queens College and The Graduate Center, City University of New York, and author of Refracted Visions: Popular Photography and National Modernity in Java, also published by Duke University Press.
REVIEWS
“Karen Strassler convincingly links ideologies of transparency that are associated with new media forms with political and social concepts. Especially valuable is her attentiveness to both the ideological valence of new media and the pragmatic implications of what it can and cannot do in practice. Smart, stylish, and sophisticated, Demanding Images is absolutely superb.”

“An inspiring account of the demands made upon images (to testify and endure) and the complex demands images make in turn upon those who use them. Establishing the conflictual politics of the visual, Karen Strassler dissects the ambivalence and volatility of image-events in prose that is both analytically precise and poetically rich. This is a learned contribution to the study of contemporary Indonesia and an ominous handbook illuminating the convulsive nature of new media landscapes that are changing lives everywhere.”