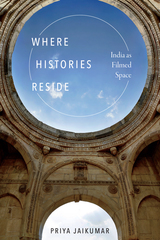 In Where Histories Reside Priya Jaikumar examines eight decades of films shot on location in India to show how attending to filmed space reveals alternative timelines and histories of cinema. In this bold “spatial” film historiography, Jaikumar outlines factors that shape India's filmed space, from state bureaucracies and commercial infrastructures to aesthetic styles and neoliberal policies. Whether discussing how educational shorts from Britain and India transform natural landscapes into instructional lessons or how Jean Renoir’s The River (1951) presents a universal human condition through the particularities of place, Jaikumar demonstrates that the history of filming a location has always been a history of competing assumptions, experiences, practices, and representational regimes. In so doing, she reveals that addressing the persistent question of “what is cinema?” must account for an aesthetics and politics of space.
AUTHOR BIOGRAPHY
Priya Jaikumar is Professor of Cinema and Media Studies at the University of Southern California and author of Cinema at the End of Empire: A Politics of Transition in Britain and India, also published by Duke University Press.
REVIEWS
-- Tom Conley, Abbott Lawrence Lowell Professor, Harvard University