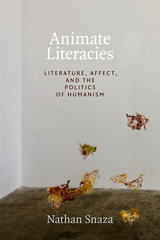 In Animate Literacies Nathan Snaza proposes a new theory of literature and literacy in which he outlines how literacy is both constitutive of the social and used as a means to define the human. Weaving new materialism with feminist, queer, and decolonial thought, Snaza theorizes literacy as a contact zone in which humans, nonhuman animals, and nonvital objects such as chairs and paper all become active participants. In readings of classic literature by Kate Chopin, Frederick Douglass, James Joyce, Toni Morrison, Mary Shelley, and others, Snaza emphasizes the key roles that affect and sensory experiences play in literacy. Snaza upends common conceptions of literacy and its relation to print media, showing instead how such understandings reinforce dehumanizations linked to dominant imperialist, heterosexist, and capitalist definitions of the human. The path toward disrupting such exclusionary, humanist frameworks, Snaza contends, lies in formulating alternative practices of literacy and literary study that escape disciplined knowledge production.
AUTHOR BIOGRAPHY
Nathan Snaza teaches English literature, gender studies, and educational foundations at the University of Richmond.
REVIEWS
-- Stacy Alaimo, author of Exposed: Environmental Politics and Pleasures in Posthuman Times