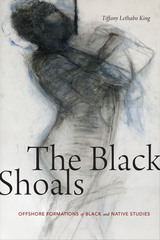 In The Black Shoals Tiffany Lethabo King uses the shoal—an offshore geologic formation that is neither land nor sea—as metaphor, mode of critique, and methodology to theorize the encounter between Black studies and Native studies. King conceptualizes the shoal as a space where Black and Native literary traditions, politics, theory, critique, and art meet in productive, shifting, and contentious ways. These interactions, which often foreground Black and Native discourses of conquest and critiques of humanism, offer alternative insights into understanding how slavery, anti-Blackness, and Indigenous genocide structure white supremacy. Among texts and topics, King examines eighteenth-century British mappings of humanness, Nativeness, and Blackness; Black feminist depictions of Black and Native erotics; Black fungibility as a critique of discourses of labor exploitation; and Black art that rewrites conceptions of the human. In outlining the convergences and disjunctions between Black and Native thought and aesthetics, King identifies the potential to create new epistemologies, lines of critical inquiry, and creative practices.
AUTHOR BIOGRAPHY
Tiffany Lethabo King is Assistant Professor of Women's, Gender, and Sexuality Studies at Georgia State University.
REVIEWS
-- Mishauna Goeman, author of Mark My Words: Native Women Mapping Our Nations