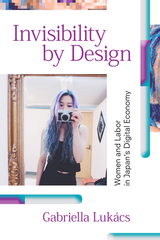 In the wake of labor market deregulation during the 2000s, online content sharing and social networking platforms were promoted in Japan as new sites of work that were accessible to anyone. Enticed by the chance to build personally fulfilling careers, many young women entered Japan's digital economy by performing unpaid labor as photographers, net idols, bloggers, online traders, and cell phone novelists. While some women leveraged digital technology to create successful careers, most did not. In Invisibility by Design Gabriella Lukács traces how these women's unpaid labor became the engine of Japan's digital economy. Drawing on interviews with young women who strove to sculpt careers in the digital economy, Lukács shows how platform owners tapped unpaid labor to create innovative profit-generating practices without employing workers, thereby rendering women's labor invisible. By drawing out the ways in which labor precarity generates a demand for feminized affective labor, Lukács underscores the fallacy of the digital economy as a more democratic, egalitarian, and inclusive mode of production.
AUTHOR BIOGRAPHY
Gabriella Lukács is Associate Professor of Anthropology at the University of Pittsburgh and author of Scripted Affects, Branded Selves: Television, Subjectivity, and Capitalism in 1990s Japan, also published by Duke University Press.
REVIEWS
-- Ian Condry, author of The Soul of Anime: Collaborative Creativity and Japan’s Media Success Story