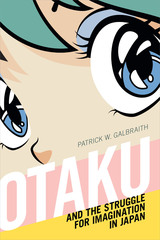 From computer games to figurines and maid cafes, men called “otaku” develop intense fan relationships with “cute girl” characters from manga, anime, and related media and material in contemporary Japan. While much of the Japanese public considers the forms of character love associated with “otaku” to be weird and perverse, the Japanese government has endeavored to incorporate “otaku” culture into its branding of “Cool Japan.” In Otaku and the Struggle for Imagination in Japan, Patrick W. Galbraith explores the conflicting meanings of “otaku” culture and its significance to Japanese popular culture, masculinity, and the nation. Tracing the history of “otaku” and “cute girl” characters from their origins in the 1970s to his recent fieldwork in Akihabara, Tokyo (“the Holy Land of Otaku”), Galbraith contends that the discourse surrounding “otaku” reveals tensions around contested notions of gender, sexuality, and ways of imagining the nation that extend far beyond Japan. At the same time, in their relationships with characters and one another, “otaku” are imagining and creating alternative social worlds.
AUTHOR BIOGRAPHY
Patrick W. Galbraith is a lecturer at Senshū University in Tokyo. He is the author of The Moe Manifesto: An Insider's Look at the Worlds of Manga, Anime, and Gaming, coauthor of AKB48, and coeditor of Idols and Celebrity in Japanese Media Culture.
REVIEWS
“In this tremendous book, Patrick W. Galbraith brings to life the relatively unknown world of Japanese popular culture. His voice shines throughout thoughtful interviews, detailed ethnography, sensitive portraits of people characterized as ‘otaku,’ and nuanced readings of videogames and interactive fiction. An impressive contribution to the field of manga and anime studies.”

“This book offers nothing less than a thorough rethinking of normative sexuality and alternative sexualities through the figure of the otaku and their practices. It's everything that the fields of Japan studies, queer theory, and media history need at this moment. A virtually flawless and captivating read.”

"This thoughtful investigation of hegemonic masculinity and its alternatives at the margins of imagination is well-sourced with cultural and academic research as well as personal experience."


Dedication / Acknowledgments  ix
Introduction. "Otaku" and the Struggle for Imagination in Japan  1
1. Seeking an Alternative: "Male Sōjo Fans since the 1970s  20
2. "Otaku" Research and Reality Problems  49
3. Moe: An Affective Response to Fictional Characters  76
4. Akihabara: "Otaku" and Contested Imaginaries in Japan  127
5. Maid Cafés: Relations with Fictional and Real Others in Spaces Between  184
Conclusion. Eshi 100: The Politics of Japanese, "Otaku," Popular Culture in Akihabara and Beyond  227
Notes  261
Bibliography  289
Index  311