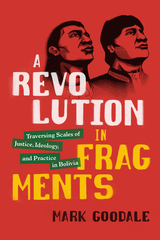 The years between 2006 and 2015, during which Evo Morales became Bolivia's first indigenous president, have been described as a time of democratic and cultural revolution, world renewal (Pachakuti), reconstituted neoliberalism, or simply “the process of change.” In A Revolution in Fragments Mark Goodale unpacks these various analytical and ideological frameworks to reveal the fragmentary and contested nature of Bolivia's radical experiments in pluralism, ethnic politics, and socioeconomic planning. Privileging the voices of social movement leaders, students, indigenous intellectuals, women's rights activists, and many others, Goodale uses contemporary Bolivia as an ideal case study with which to theorize the role that political agency, identity, and economic equality play within movements for justice and structural change.
AUTHOR BIOGRAPHY
Mark Goodale is Professor of Cultural and Social Anthropology at the University of Lausanne and the author and editor of numerous books, most recently, The Bolivia Reader: History, Culture, Politics, also published by Duke University Press, and Anthropology and Law.
REVIEWS
-- Andrew Canessa, author of Intimate Indigeneities: Race, Sex, and History in the Small Spaces of Andean Life


Preface  ix
Introduction. Meaning and Crisis in Cosmic Time  1
1. Hearing Revolution in a Minor Key  33
2. Legal Cosmovisions  64
3. Opposition as a Cultural System: Myth, Embodiment, Violence  95
4. A Revolution without Revolutionaries: El proceso de cambio in a Trotskyized Country  134
5. The Unstable Assemblage of Law  166
6. And the Pututu Shall Sound  200
Conclusion. The Politics of Forever  234
Notes  249
References  265
Index  283