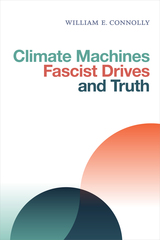 In this new installation of his work, William E. Connolly examines entanglements between volatile earth processes and emerging cultural practices, highlighting relays among extractive capitalism, self-amplifying climate processes, migrations, democratic aspirations, and fascist dangers. In three interwoven essays, Connolly takes up thinkers in the "minor tradition" of European thought who, unlike Cartesians and Kantians, cross divisions between nature and culture. He first offers readings of Sophocles and Mary Shelley, asking whether close attention to the Anthropocene could perhaps have arrived earlier had subsequent humanists absorbed their lessons. He then joins Deleuze and Guattari's notion of an abstract machine with contemporary earth sciences, doing so to compare the Antique Little Ice Age of the late Roman empire to contemporary relays between extractive capitalism and accelerating climate processes. The final essay stages a dramatic dialogue between Alfred North Whitehead and Michel Foucault about the pursuit of truth during a time of planetary turbulence. With Climate Machines Fascist Drives, and Truth, Connolly forges incisive interventions into key issues of our time.
AUTHOR BIOGRAPHY
William E. Connolly is Krieger-Eisenhower Professor at Johns Hopkins University, where he teaches political theory. His recent books include Facing the Planetary and The Fragility of Things, both also published by Duke University Press, and Aspirational Fascism.
REVIEWS
-- Catherine Keller, author of Political Theology of the Earth: Our Planetary Emergency and the Struggle for a New Public