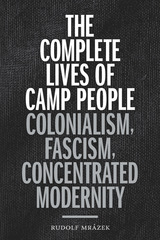 In The Complete Lives of Camp People Rudolf Mrázek presents a sweeping study of the material and cultural lives of twentieth-century concentration camp internees and the multiple ways in which their experiences speak to the fundamental logics of modernity. Mrázek focuses on the minutiae of daily life in two camps: Theresienstadt, a Nazi “ghetto” for Jews near Prague, and the Dutch “isolation camp” Boven Digoel—which was located in a remote part of New Guinea between 1927 and 1943 and held Indonesian rebels who attempted to overthrow the colonial government. Drawing on a mix of interviews with survivors and their descendants, archival accounts, ephemera, and media representations, Mrázek shows how modern life's most mundane tasks—buying clothes, getting haircuts, playing sports—continued on in the camps, which were themselves designed, built, and managed in accordance with modernity's tenets. In this way, Mrázek demonstrates that concentration camps are not exceptional spaces; they are the locus of modernity in its most distilled form.
AUTHOR BIOGRAPHY
Rudolf Mrázek is Emeritus Professor of History at the University of Michigan and the author of several books, including A Certain Age: Colonial Jakarta through the Memories of its Intellectuals, also published by Duke University Press.
REVIEWS
-- Rosalind C. Morris, Professor of Anthropology, Columbia University