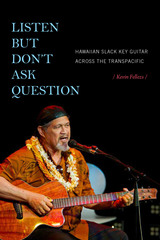 Performed on an acoustic steel-string guitar with open tunings and a finger-picking technique, Hawaiian slack key guitar music emerged in the mid-nineteenth century. Though performed on a non-Hawaiian instrument, it is widely considered to be an authentic Hawaiian tradition grounded in Hawaiian aesthetics and cultural values. In Listen But Don’t Ask Question Kevin Fellezs listens to Kanaka Maoli (Native Hawaiian) and non-Hawaiian slack key guitarists in Hawai‘i, California, and Japan, attentive to the ways in which notions of Kanaka Maoli belonging and authenticity are negotiated and articulated in all three locations. In Hawai‘i, slack key guitar functions as a sign of Kanaka Maoli cultural renewal, resilience, and resistance in the face of appropriation and occupation, while in Japan it nurtures a merged Japanese-Hawaiian artistic and cultural sensibility. For diasporic Hawaiians in California, it provides a way to claim Hawaiian identity. By demonstrating how slack key guitar is a site for the articulation of Hawaiian values, Fellezs illuminates how slack key guitarists are reconfiguring notions of Hawaiian belonging, aesthetics, and politics throughout the transPacific.
AUTHOR BIOGRAPHY
Kevin Fellezs is Associate Professor in the Music and African American and African Diaspora Studies departments at Columbia University and author of Birds of Fire: Jazz, Rock, Funk, and the Creation of Fusion, also published by Duke University Press.
REVIEWS
“In addition to telling Hawaiian slack key guitar's remarkable history, Kevin Fellezs provides an excellent introduction to the political, social, and economic challenges endured by Hawaiians who live in a homeland dominated by people who have even appropriated the word ‘aloha’ to expedite material and cultural plunder. This book is a wonderful achievement and a significant intellectual feat.”

“Listen but Don't Ask Question theorizes a ‘polycultural transPacific’ to highlight Kanaka Maoli (Native Hawaiians) as central participants in the cultural production of slack key guitar music while attending to the multiple lineages tradition. Kevin Fellezs illuminates the complications of cultural and material stewardship as they are bound up in the performance and perpetuation of the musical form, Hawaiian principles of reciprocity, cultural revival and the music industry, community and belonging, and aesthetics. This is bold, rich, and important work that is well researched, robustly conceptualized, and finely written.”