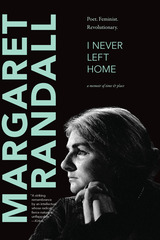 In 1969, poet and revolutionary Margaret Randall was forced underground when the Mexican government cracked down on all those who took part in the 1968 student movement. Needing to leave the country, she sent her four young children alone to Cuba while she scrambled to find safe passage out of Mexico. In I Never Left Home, Randall recounts her harrowing escape and the other extraordinary stories from her life and career.
From living among New York's abstract expressionists in the mid-1950s as a young woman to working in the Nicaraguan Ministry of Culture to instill revolutionary values in the media during the Sandinista movement, the story of Randall's life reads like a Hollywood production. Along the way, she edited a bilingual literary journal in Mexico City, befriended Cuban revolutionaries, raised a family, came out as a lesbian, taught college, and wrote over 150 books. Throughout it all, Randall never wavered from her devotion to social justice.
When she returned to the United States in 1984 after living in Latin America for twenty-three years, the U.S. Immigration and Naturalization Service ordered her to be deported for her “subversive writing.” Over the next five years, and with the support of writers, entertainers, and ordinary people across the country, Randall fought to regain her citizenship, which she won in court in 1989.
As much as I Never Left Home is Randall's story, it is also the story of the communities of artists, writers, and radicals she belonged to. Randall brings to life scores of creative and courageous people on the front lines of creating a more just world. She also weaves political and social analyses and poetry into the narrative of her life. Moving, captivating, and astonishing, I Never Left Home is a remarkable story of a remarkable woman.
AUTHOR BIOGRAPHY
Margaret Randall is a poet, essayist, oral historian, translator, memoirist, and photographer who has published over 150 books of poetry and prose, including Exporting Revolution: Cuba's Global Solidarity; Haydée Santamaría, Cuban Revolutionary: She Led by Transgression; and Che on My Mind, all also published by Duke University Press. Randall was awarded the Poet of Two Hemispheres Prize by Poesía en Paralelo Cero in Quito, Ecuador, and Cuba's Haydée Santamaría medal, and the University of New Mexico gave her an honorary doctorate of letters, all in 2019. She is also the 2020 recipient of the AWP George Garrett Award for Outstanding Community Service in Literature. In addition to giving seminars and workshops throughout the United States and Latin America, Randall has taught at the University of New Mexico, Macalester College, the University of Delaware, and Trinity College in Hartford, Connecticut. Randall lives in Albuquerque, New Mexico.
REVIEWS
-- Roxanne Dunbar-Ortiz, author of An Indigenous Peoples’ History of the United States


-- Garrett Caples, coeditor of The Collected Poems of Philip Lamantia


-- Achy Obejas, author of The Tower of the Antilles