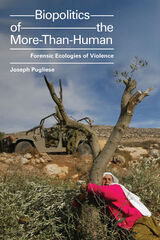 In Biopolitics of the More-Than-Human Joseph Pugliese examines the concept of the biopolitical through a nonanthropocentric lens, arguing that more-than-human entities—from soil and orchards to animals and water—are actors and agents in their own right with legitimate claims to justice. Examining occupied Palestine, Guantánamo, and sites of US drone strikes in Afghanistan, Pakistan, Somalia, and Yemen, Pugliese challenges notions of human exceptionalism by arguing that more-than-human victims of war and colonialism are entangled with and subject to the same violent biopolitical regimes as humans. He also draws on Indigenous epistemologies that invest more-than-human entities with judicial standing to argue for an ethico-legal framework that will enable the realization of ecological justice. Bringing the more-than-human world into the purview of justice, Pugliese makes visible the ecological effects of human war that would otherwise remain outside the domains of biopolitics and law.
AUTHOR BIOGRAPHY
Joseph Pugliese is Professor of Cultural Studies at Macquarie University and author of, most recently, State Violence and the Execution of Law: Biopolitical Caesurae of Torture, Black Sites, Drones.
REVIEWS
“A mesmerizing exploration of the more-than-human dimensions of later modern war that is never less than deeply human. Linguistically inventive, analytically sobering—you keep wondering why it has taken us so long to see like this—Joseph Pugliese's vision of forensic ecology initiates an arrestingly novel critique of military violence. At once profoundly political and deeply ethical, this is a magnificently vital achievement.”

“Joseph Pugliese’s reconfiguration of biopolitics does not simply take the politics of populations and life and extend its range to include the more-than-human; the very threshold between the human and ‘other’ life-forms falls away. What is revealed is a new political-legal ethics entirely: not a question of how ‘we’ humans grant rights to others, but of how the more-than-human offers itself as an imperative to rethink the anthropocentrism of European law. Exploring Indigenous and non-Western cosmologies provides a way to think about life, value, and politics that does not rely on the dignity of the human and its concomitant violence for all that is other-than-human. It is rare to read a book that combines such theoretical dexterity with fascinating empirical analysis of some of our most pressing ethical issues.”

-- Claire Colebrook, author of Death of the PostHuman: Essays on Extinction