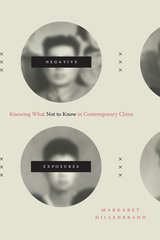 When nations decide to disown their troubled pasts, how does this strategic disavowal harden into social fact? In Negative Exposures, Margaret Hillenbrand investigates the erasure of key aspects of such momentous events as the Nanjing Massacre, the Cultural Revolution, and the Tiananmen Square protests from the Chinese historical consciousness, not due to amnesia or censorship but through the operations of public secrecy. Knowing what not to know, she argues, has many stakeholders, willing and otherwise, who keep quiet to protect themselves or their families out of shame, pragmatism, or the palliative effects of silence. Hillenbrand shows how secrecy works as a powerful structuring force in Chinese society, one hiding in plain sight, and identifies aesthetic artifacts that serve as modes of reckoning against this phenomenon. She analyses the proliferation of photo-forms—remediations of well-known photographs of troubling historical events rendered in such media as paint, celluloid, fabric, digital imagery, and tattoos—as imaginative spaces in which the shadows of secrecy are provocatively outlined.
AUTHOR BIOGRAPHY
Margaret Hillenbrand is Associate Professor of Modern Chinese Literature and Culture at the University of Oxford. She is the author of Literature, Modernity, and the Practice of Resistance and the coeditor of Documenting China.
REVIEWS
“Negative Exposures is a brave and revelatory book. With lyrical prose, nuanced argumentation, and a photosensitive eye, Margaret Hillenbrand limns the contours of China's contemporary cryptocracy, showing us how photographic images can work both to obscure and to bring the shadows of the historical past back into spectral presence.”

“Negative Exposures is a boldly original book that analyzes cultural works based on photographs as objects that enable us to see and think through the unsayable in China. Margaret Hillenbrand contends that a culture of public secrecy, rather than censorship or historical amnesia, can explain how ordinary Chinese citizens fail or refuse to see and speak about difficult issues. This book is a powerful intervention that will be warmly welcomed and widely applauded.”