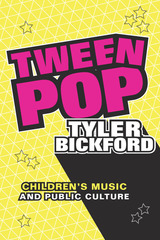 In the early years of the twenty-first century, the US music industry created a new market for tweens, selling music that was cooler than Barney, but that still felt safe for children. In Tween Pop Tyler Bickford traces the dramatic rise of the “tween” music industry, showing how it marshaled childishness as a key element in legitimizing children's participation in public culture. The industry played on long-standing gendered and racialized constructions of childhood as feminine and white—both central markers of innocence and childishness. In addition to Kidz Bop, High School Musical, and the Disney Channel's music programs, Bickford examines Taylor Swift in relation to girlhood and whiteness, Justin Bieber's childish immaturity, and Miley Cyrus/Hannah Montana and postfeminist discourses of work-life balance. In outlining how tween pop imagined and positioned childhood as both intimate and public as well as a cultural identity to be marketed to, Bickford demonstrates the importance of children's music to core questions of identity politics, consumer culture, and the public sphere.
AUTHOR BIOGRAPHY
Tyler Bickford is Associate Professor of English at the University of Pittsburgh and author of Schooling New Media: Music, Language, and Technology in Children's Culture.
REVIEWS
“A pathbreaking contribution that will reach and be relevant to a wide audience, Tween Pop is the first book to treat the tween pop explosion of the 2000s as a cohesive phenomenon. I have no doubt that it will reach a wide audience while repositioning music as central to childhood studies and demanding for children's music a central place in the study of popular music as a whole.”

-- Diane Pecknold, author of The Selling Sound: The Rise of the Country Music Industry

“Tyler Bickford masterfully describes a ‘tween moment’ in American public culture, examining those young music consumers who teeter between childhood and adolescence, and the attention of the popular music industry in reconceptualizing music for them in this critical growth stage. This highly original and ambitious book is a substantial contribution to ethnomusicology, sociology, media studies, education, and child studies, and convincingly clarifies the struggle of the culture industries to convert childhood into a cultural identity all its own.”