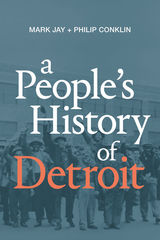 Recent bouts of gentrification and investment in Detroit have led some to call it the greatest turnaround story in American history. Meanwhile, activists point to the city's cuts to public services, water shutoffs, mass foreclosures, and violent police raids. In A People's History of Detroit, Mark Jay and Philip Conklin use a class framework to tell a sweeping story of Detroit from 1913 to the present, embedding Motown's history in a global economic context. Attending to the struggle between corporate elites and radical working-class organizations, Jay and Conklin outline the complex sociopolitical dynamics underlying major events in Detroit's past, from the rise of Fordism and the formation of labor unions, to deindustrialization and the city's recent bankruptcy. They demonstrate that Detroit's history is not a tale of two cities—one of wealth and development and another racked by poverty and racial violence; rather it is the story of a single Detroit that operates according to capitalism's mandates.
AUTHOR BIOGRAPHY
Mark Jay is a PhD candidate in sociology at the University of California, Santa Barbara.

Philip Conklin is a PhD student in the History of Consciousness at the University of California, Santa Cruz.

They are coeditors of the literary and political magazine The Periphery.
REVIEWS
-- Alberto Toscano, Reader in Critical Theory, Goldsmiths, University of London