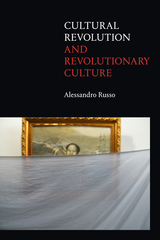 In Cultural Revolution and Revolutionary Culture, Alessandro Russo presents a dramatic new reading of China's Cultural Revolution as a mass political experiment aimed at thoroughly reexamining the tenets of communism. Russo explores four critical phases of the Cultural Revolution, each with its own reworking of communist political subjectivity: the historical-theatrical “prologue” of 1965; Mao's attempts to shape the Cultural Revolution in 1965 and 1966; the movements and organizing between 1966 and 1968 and the factional divides that ended them; and the mass study campaigns from 1973 to 1976 and the unfinished attempt to evaluate the inadequacies of the political decade that brought the Revolution to a close. Among other topics, Russo shows how the dispute around the play Hai Rui Dismissed from Office was not the result of a Maoist conspiracy, but rather a series of intense and unresolved political and intellectual controversies. He also examines the Shanghai January Storm and the problematic foundation of the short-lived Shanghai Commune. By exploring these and other political-cultural moments of Chinese confrontations with communist principles, Russo overturns conventional wisdom about the Cultural Revolution.
AUTHOR BIOGRAPHY
Alessandro Russo has taught sociology at the University of Bologna and has been visiting professor at the University of Washington and at Qinghua University.
REVIEWS
-- Alain Badiou


Acknowledgments  vii
Introduction  1
Part I. A Theatrical Prologue
1. Afterlives of an "Upright Official"  11
2. Political and Historical Dilemmas  26
3. An Unresolved Controversy  48
Part II. Mao's Anxiety and Resolve
4. A Probable Defeat and Revisionism  91
5. Shrinking the Cultural Superego  104
Part III. A Political Test for Class Politics
6. Testing the Organization  141
7. A Subjective Split in the Working Class  167
8. Facing a Self-Defeat  204
Part IV. At the Edge of an Epochal Turning Point
9. Intellectual Conditions for a Political Assessment  239
10. Foundations of Deng Xiaoping's Strategy  263
Notes  285
Bibliography  323
Index