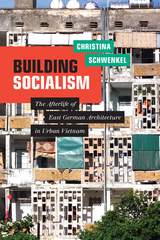 Following a decade of U.S. bombing campaigns that obliterated northern Vietnam, East Germany helped Vietnam rebuild in an act of socialist solidarity. In Building Socialism Christina Schwenkel examines the utopian visions of an expert group of Vietnamese and East German urban planners who sought to transform the devastated industrial town of Vinh into a model socialist city. Drawing on archival and ethnographic research in Vietnam and Germany with architects, engineers, construction workers, and tenants in Vinh’s mass housing complex, Schwenkel explores the material and affective dimensions of urban possibility and the quick fall of Vinh’s new built environment into unplanned obsolescence. She analyzes the tensions between aspirational infrastructure and postwar uncertainty to show how design models and practices that circulated between the socialist North and the decolonizing South underwent significant modification to accommodate alternative cultural logics and ideas about urban futurity. By documenting the building of Vietnam’s first planned city and its aftermath of decay and repurposing, Schwenkel argues that underlying the ambivalent and often unpredictable responses to modernist architectural forms were anxieties about modernity and the future of socialism itself.
AUTHOR BIOGRAPHY
Christina Schwenkel is Professor of Anthropology at the University of California, Riverside, and author of The American War in Contemporary Vietnam: Transnational Remembrance and Representation.
REVIEWS
“A triumph of interdisciplinary and transnational scholarship! Following a compelling new case of international ‘high-socialist’ architecture, Christina Schwenkel bridges the histories of and scholarship on Eastern European and Asian socialisms. The oft-maligned but poorly understood city of Vinh proves to be an unexpected center of international solidarity and a riveting example of human resilience. Its story offers a significant perspective on Vietnamese history, socialist internationalism, postwar reconstruction, post-socialism, neoliberal redevelopment, and urban history.”

-- Erik Harms, author of Luxury and Rubble: Civility and Dispossession in the New Saigon

“In this extraordinary book, the anthropological and architectural histories of the city of Vinh emerge between the hour zero when B-52s fly over Vinh and the ebbing of obsolescence. Christina Schwenkel addresses urban space and design in an enlightening and unsettling manner, evoking and explaining the ‘building of socialism’ as both a Vietnamese and an East German phenomenon in its postcolonial and postmodern contexts.”