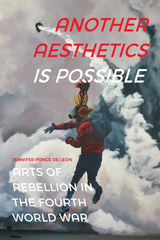 In Another Aesthetics Is Possible Jennifer Ponce de León examines the roles that art can play in the collective labor of creating and defending another social reality. Focusing on artists and art collectives in Argentina, Mexico, and the United States, Ponce de León shows how experimental practices in the visual, literary, and performing arts have been influenced by and articulated with leftist movements and popular uprisings that have repudiated neoliberal capitalism and its violence. Whether enacting solidarity with Zapatista communities through an alternate reality game or using surrealist street theater to amplify the more radical strands of Argentina's human rights movement, these artists fuse their praxis with forms of political mobilization from direct-action tactics to economic resistance. Advancing an innovative transnational and transdisciplinary framework of analysis, Ponce de León proposes a materialist understanding of art and politics that brings to the fore the power of aesthetics to both compose and make visible a world beyond capitalism.
AUTHOR BIOGRAPHY
Jennifer Ponce de León is Assistant Professor of English at the University of Pennsylvania.
REVIEWS
“One of the most significant areas of new research in socially engaged art concerns the ways in which this work both challenges existing aesthetic paradigms and calls upon us to develop new ones that can account for its unique complexity as both artistic practice and political praxis. Another Aesthetics Is Possible breaks new ground in this endeavor, offering a materialist concept of the aesthetic, rooted in Marxist theory and anticolonial resistance, along with nuanced readings of key projects developed in the Americas over the past two decades. Sure to be required reading for classes in activist and engaged art as well as postcolonial studies.”

“Rather than thinking about art as a response to oppressive political moments, Jennifer Ponce de León points us to artistic practices that force us to read against the systems of domination that authoritarian regimes and liberal ideologies uphold. Another Aesthetics Is Possible makes a profound intervention in fields interested in the intersection of art and politics, serving as a model into the future for anyone interested in truly ameliorating social and economic circumstances for people across the Americas. Engaging and thoroughly provocative.”