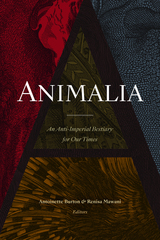 From yaks and vultures to whales and platypuses, animals have played central roles in the history of British imperial control. The contributors to Animalia analyze twenty-six animals—domestic, feral, predatory, and mythical—whose relationship to imperial authorities and settler colonists reveals how the presumed racial supremacy of Europeans underwrote the history of Western imperialism. Victorian imperial authorities, adventurers, and colonists used animals as companions, military transportation, agricultural laborers, food sources, and status symbols. They also overhunted and destroyed ecosystems, laying the groundwork for what has come to be known as climate change. At the same time, animals such as lions, tigers, and mosquitoes interfered in the empire's racial, gendered, and political aspirations by challenging the imperial project’s sense of inevitability. Unconventional and innovative in form and approach, Animalia invites new ways to consider the consequences of imperial power by demonstrating how the politics of empire—in its racial, gendered, and sexualized forms—played out in multispecies relations across jurisdictions under British imperial control.

Renisa Mawani is Professor of Sociology at the University of British Columbia and is the author of Across Oceans of Law: The Komagata Maru and Jurisdiction in the Time of Empire, also published by Duke University Press.
REVIEWS
“Animalia shows us how imperial power was both extended through and disturbed by the multiple entanglements of human/animal worlds. The elephants, lions, and tigers familiar to the imperial imagination jostle with mosquitoes, scorpions, and unicorns, offering a rich variety of animal engagements with empire, both for and against their would-be masters. An essential bestiary for our times.”

-- Catherine Hall author of Civilising Subjects. Metropole and Colony in the English Imagination, 1830–1867

“With appealing quirkiness, Animalia introduces readers to the complex ways that humans' treatment of animals offers an informative and genuinely fascinating way of understanding how pervasive the impact of imperialism was and continues to be across the globe. Written with verve and elegance while conveying the surprising importance of all sorts of species to the imperial project, Animalia is an intriguing and exhilarating book.”

-- Teresa Mangum, editor of A Cultural History of Women in the Age of Empire


Acknowledgments
Introduction: Animals, the Bestiary Form, and Disruptive Imperial Histories / Antoinette Burton and Renisa Mawani
Some Ways to Read This Book
A Is for Ape / Amy E. Martin
B Is for Boar / Annaliese Claydon
C Is for Cattle / Renisa Mawani
D Is for Dog / Heidi J. Nast
E Is for Elephant / Jonathan Saha
F Is for Fox / George Robb
G Is for Giraffe / Angela Thompsell
H Is for Horse / Jagjeet Lally
I Is for Ibis / Renisa Mawani
J Is for Jackal (and Dingo) / Isabel Hofmeyr
K Is for Kiwi / Tony Ballantyne
L Is for Lion / Antoinette Burton
M Is for Mosquito / Neel Ahuja
N Is for North Atlantic Right Whale / Krista Maglen
O Is for Okapi / Sandra Swart
P Is for Platypus / Annaliese Claydon
Q Is for Quagga / Harriet Ritvo
R Is for Racoon / Daniel Heath Justice
S Is for Scorpion / Antoinette Burton
T Is for Tiger / Dane Kennedy
U Is for Unicorn / Utathya Chattopadhyaya
V Is for Vulture / Utathya Chattopadhyaya
W Is for Whale / Jonathan Goldberg-Hiller
X Is for Xerus / Utathya Chattopadhyaya
Y Is for Yak / Peter Hansen
Z is for Zebu / Michael A. Osborne
Contributors
Index