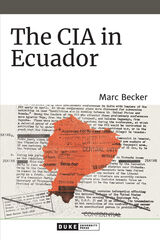 In The CIA in Ecuador Marc Becker draws on recently released US government surveillance documents on the Ecuadorian left to chart social movement organizing efforts during the 1950s. Emphasizing the competing roles of the domestic ruling class and grassroots social movements, Becker details the struggles and difficulties that activists, organizers, and political parties confronted. He shows how leftist groups, including the Communist Party of Ecuador, navigated disagreements over tactics and ideology, and how these influenced shifting strategies in support of rural Indigenous communities and urban labor movements. He outlines the CIA's failure to understand that the Ecuadorian left was rooted in local social struggles rather than bankrolled by the Soviet Union. By decentering US-Soviet power struggles, Becker shows that the local patterns and dynamics that shaped the development of the Ecuadorian left could be found throughout Latin America during the cold war.
AUTHOR BIOGRAPHY
Marc Becker is Professor of History at Truman State University and the author and editor of several books, including The FBI in Latin America: The Ecuador Files and Indians and Leftists in the Making of Ecuador's Modern Indigenous Movements, both also published by Duke University Press.
REVIEWS
“Marc Becker is among our most respected scholars of cold war politics and policing in Latin America and this book will be a valuable addition to the growing body of literature on the topic that provides much-needed historiography on Ecuador.”

-- Greg Grandin, author of The End of the Myth: From the Frontier to the Border Wall in the Mind of America

“I am aware of no other book that goes into such detail on the evolution of the Ecuadorian Communist Party. Among Marc Becker's most important findings is his refreshing argument that Ecuadorian communism and anticommunism both emerged from Ecuadorian conflicts, aspirations, and class struggles. The party was not a puppet of Moscow, nor was the government a puppet of Washington. In line with some of the best work on Latin America's cold war, this volume makes an original and valuable contribution and will be as welcomed in the field as his excellent The FBI in Latin America.”