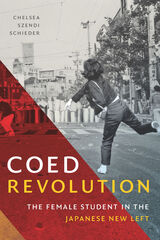 In the 1960s, a new generation of university-educated youth in Japan challenged forms of capitalism and the state. In Coed Revolution Chelsea Szendi Schieder recounts the crucial stories of Japanese women's participation in these protest movements led by the New Left through the early 1970s. Women were involved in contentious politics to an unprecedented degree, but they and their concerns were frequently marginalized by men in the movement and the mass media, and the movement at large is often memorialized as male and masculine. Drawing on stories of individual women, Schieder outlines how the media and other activists portrayed these women as icons of vulnerability and victims of violence, making women central to discourses about legitimate forms of postwar political expression. Schieder disentangles the gendered patterns that obscured radical women's voices to construct a feminist genealogy of the Japanese New Left, demonstrating that student activism in 1960s Japan cannot be understood without considering the experiences and representations of these women.
AUTHOR BIOGRAPHY
Chelsea Szendi Schieder is Associate Professor, Faculty of Economics, Aoyama Gakuin University.
REVIEWS
“Coed Revolution is a fascinating study of the role and representation of female student activists in the Japanese New Left. Chelsea Szendi Schieder examines the lives and writings of women who were forgotten and misrepresented, both by media sources of that time and by contemporary scholars. This is an important contribution to the study of gender and revolutionary activism during the global 1960s.”

-- Judy Tzu-Chun Wu, author of Radicals on the Road: Internationalism, Orientalism, and Feminism during the Vietnam Era

“Coed Revolution offers new insights into a crucial dimension of 1960s contentions in Japan through a nuanced examination of both the experience and representation of women in activism during this period. Chelsea Szendi Schieder brings out the stakes in reconceiving this history within a global frame in terms that will make her detailed analysis resonate for a wide range of readers. An important work.”


Acknowledgments  vii
Introduction: Gendering the New Japanese Left  1
1. Naive Politics: A Maiden Sacrifice for Postwar Democracy  21
2. "My Love and Rebellion": The Politics of Nurturing, the Logic of Capital, and the Rationalization of Coeducation  49
3.  Is the Personal Political? Everyday Life as a Site of Struggle in the Campus New Left  78
4. "When You Fuck a Vanguard Girl . . .": The Spectacle of New Left Masculinity  104
5. "Gewalt Rosas": The Creation of the Terrifying, Titillating Female Student Activist  132
Conclusion: Revolutionary Desire  158
Notes  169
Bibliography  191
Index  205