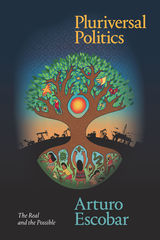 In Pluriversal Politics Arturo Escobar engages with the politics of the possible and how established notions of what is real and attainable preclude the emergence of radically alternative visions of the future. Reflecting on the experience, philosophy, and practice of indigenous and Afro-descendant activist-intellectuals and on current Latin American theoretical-political debates, Escobar chronicles the social movements mobilizing to defend their territories from large-scale extractive operations in the region. He shows how these movements engage in an ontological politics aimed at bringing about the pluriverse—a world consisting of many worlds, each with its own ontological and epistemic grounding. Such a politics, Escobar contends, is key to crafting myriad world-making stories telling of different possible futures that could bring about the profound social transformations that are needed to address planetary crises. Both a call to action and a theoretical provocation, Pluriversal Politics finds Escobar at his critically incisive best.
AUTHOR BIOGRAPHY
Arturo Escobar is Professor Emeritus of Anthropology at the University of North Carolina, Chapel Hill, and the author of several books, including Designs for the Pluriverse: Radical Interdependence, Autonomy, and the Making of Worlds and Territories of Difference: Place, Movements, Life, Redes, both also published by Duke University Press.
REVIEWS
-- Charles R. Hale, coeditor of Otros Saberes: Collaborative Research on Indigenous and Afro-Descendant Cultural Politics


Preface to the English Edition  ix
Prologue  xxxv
Acknowledgments  xxxix
Introduction: Another Possible Is Possible  1
1. Theory and the Un/Real: Tools for Rethinking "Reality" and the Possible  13
2. From Below, on the Left, and with the Earth: The Difference that Abya Yala/Afro/Latino América Makes  31
3. The Earth-Form of Life: Nasa Thought and the Limits to the Episteme of Modernity  46
4. Sentipensar with the Earth: Territorial Struggles and the Ontological Dimension of the Epistemologies of the South  67
5. Notes on Intellectual Colonialism and the Dilemmas of Latin American Social Theory  84
6. Postdevelopment @ 25: On "Being Stuck" and Moving Forward, Sideways, Backward, and Otherwise (a Conversation with Gustavo Esteva)  97
7. Cosmo/Visions of the Colombian Pacific Coast Region and Their Socioenvironmental Implications: Elements for a Dialogue of Cosmo/Visions  120
8. Beyond "Regional Development": A Design Model for Civilizational Transition in the Cauca River Valley, Colombia  136
Notes  159
References  175
Index  185