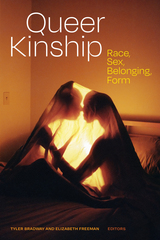 The contributors to this volume assert the importance of queer kinship to queer and trans theory and to kinship theory. In a contemporary moment marked by the rising tides of neoliberalism, fascism, xenophobia, and homo- and cis-nationalism, they approach kinship as both a horizon and a source of violence and possibility. The contributors challenge dominant theories of kinship that ignore the devastating impacts of chattel slavery, settler colonialism, and racialized nationalism on the bonds of Black and Indigenous people and people of color. Among other topics, they examine the “blood tie” as the legal marker of kin relations, the everyday experiences and memories of trans mothers and daughters in Istanbul, the outsourcing of reproductive labor in postcolonial India, kinship as a model of governance beyond the liberal state, and the intergenerational effects of the adoption of Indigenous children as a technology of settler colonialism. Queer Kinship pushes the methodological and theoretical underpinnings of queer theory forward while opening up new paths for studying kinship.

Elizabeth Freeman is Professor of English at the University of California, Davis, and author of Beside You in Time: Sense Methods and Queer Sociabilities in the American Nineteenth Century, and other books also published by Duke University Press.
TABLE OF CONTENTS