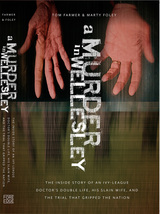 BUY
A Murder in Wellesley: The Inside Story of an Ivy-League Doctor’s Double Life, His Slain Wife, and the Trial That Gripped the Nation
by Tom Farmer and Marty Foley
Brandeis University Press, 2017
Paper: 978-1-5126-0106-0
On Halloween morning in 1999, Mabel Greineder was savagely murdered along a wooded trail in the well-heeled community of Wellesley, Massachusetts. As the shock following the brutal killing slowly subsided, the community was further shaken when the focus of the investigation turned to her husband, Dirk Greineder, a prominent physician and family man who was soon revealed to be leading a secret double life involving prostitutes, pornography, and trysts solicited through the Internet. A Murder in Wellesley takes the reader far beyond the headlines and national news coverage spawned by “May” Greineder’s killing and tells the untold story of the meticulous investigation led by Marty Foley, the lead State Police detective on the case, from the morning of the murder through Dirk Greineder’s ultimate conviction. Exhaustive interviews with key figures in the case, including many who have not talked publicly until now, contribute to an unprecedented behind-the-scenes account of how investigators methodically built their case against Greineder and how the sides taken by Dirk and May’s relatives aided the investigation but bitterly divided their families. A fascinating true-crime procedural that is also a deeply unsettling tale of the psychopath you thought you knew, of deceptions and double lives, and of families torn apart by an unthinkable crime. Culminating in one of the most dramatic courtroom spectacles in recent memory (aired nationally on Court TV), A Murder in Wellesley reveals the truth behind the murder that gripped a nation.
AUTHOR BIOGRAPHY
TOM FARMER, a former award-winning Boston newspaper reporter and editor, covered the Greineder murder case for the Boston Herald. MARTY FOLEY spent more than 24 years with the Massachusetts State Police before retiring in 2007 with the rank of Detective Lieutenant.
TABLE OF CONTENTS