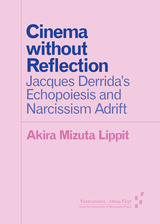 Cinema without Reflection traces an implicit film theory in Jacques Derrida’s oeuvre, especially in his frequent invocation of the myth of Echo and Narcissus. Derrida’s reflections on the economies of image and sound that reverberate in this story, along with the spectral dialectics of love, mirrors, and poiesis, serve as the basis for a theory of cinema that Derrida perhaps secretly imagined.

Following Derrida’s interventions on Echo and Narcissus across his thought on the visual arts, Akira Mizuta Lippit seeks to return to a theory of cinema adrift in Derrida’s philosophy.

Akira Mizuta Lippit teaches film and literature at the University of Southern California. He is the author of Ex-Cinema: From a Theory of Experimental Film and Video (2012), Atomic Light (Shadow Optics) (Minnesota, 2005), and Electric Animal: Toward a Rhetoric of Wildlife (Minnesota, 2000).