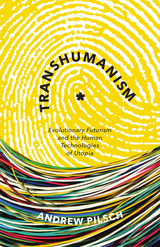 Transhumanism posits that humanity is on the verge of rapid evolutionary change as a result of emerging technologies and increased global consciousness. However, this insight is dismissed as a naive and controversial reframing of posthumanist thought, having also been vilified as “the most dangerous idea in the world” by Francis Fukuyama. In this book, Andrew Pilsch counters these critiques, arguing instead that transhumanism’s utopian rhetoric actively imagines radical new futures for the species and its habitat.

Pilsch situates contemporary transhumanism within the longer history of a rhetorical mode he calls “evolutionary futurism” that unifies diverse texts, philosophies, and theories of science and technology that anticipate a radical explosion in humanity’s cognitive, physical, and cultural potentialities. By conceptualizing transhumanism as a rhetoric, as opposed to an obscure group of fringe figures, he explores the intersection of three major paradigms shaping contemporary Western intellectual life: cybernetics, evolutionary biology, and spiritualism. In analyzing this collision, his work traces the belief in a digital, evolutionary, and collective future through a broad range of texts written by theologians and mystics, biologists and computer scientists, political philosophers and economic thinkers, conceptual artists and Golden Age science fiction writers. Unearthing the long history of evolutionary futurism, Pilsch concludes, allows us to more clearly see the novel contributions that transhumanism offers for escaping our current geopolitical bind by inspiring radical utopian thought.

3. Toward Omega: Hedonism, Suffering, and the Evolutionary Vanguard

4. Transhuman Aesthetics: The New, the Lived, and the Cute