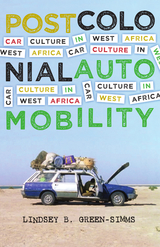 For more than a century cars have symbolized autonomous, unfettered mobility and an increasingly global experience. And yet, they are often used differently outside the centers of global capitalism. This pioneering book considers how, through the lens of the automobile, we can assess the pleasures, dangers, and limits of global modernity in West Africa. Through new and provocative readings of famous plays, novels, and films, as well as recent popular videos, Postcolonial Automobility reveals the surprising ways in which automobility in the region is, at once, an everyday practice, an ethos, a fantasy of autonomy, and an affective activity intimately tied to modern social life.

Lindsey B. Green-Simms begins with the history of motorization in West Africa from the colonial era to the decolonizing decades after World War II, and addresses the tragedy of car accidents through a close reading of Wole Soyinka’s 1965 postindependence play The Road. Shifting to screen media, she discusses Ousmane Sembene’s Xala and Jean-Pierre Bekolo’s Quartier Mozart and reviews popular, low-budget Nollywood films. Finally, Green-Simms considers how feminist texts rewrite and work in dialogue with the male-centered films and novels where the car stands in for patriarchal power and capitalist achievement.

Providing a unique perspective on technology in Africa—one refusing to be confined to narratives of either underdevelopment or inevitable progress—and covering a broad range of interdisciplinary material, Postcolonial Automobility will appeal not only to scholars and students of African literature and cinema but also to those in postcolonial and globalization studies.

Lindsey B. Green-Simms is assistant professor of literature at American University in Washington, D.C.

1. The Hum of Progress: Motorcars and the Modernization of West Africa

2. “No Danger No Delay”: Wole Soyinka and the Perils of Driving

4. The Return of the Mercedes: Upward Mobility, the Good Life, and Nigerian Video Film

5. Women in Traffic: Towards a Feminist Automobility