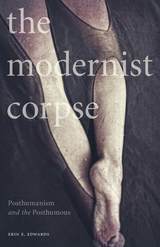 An unconventional take on the corpse challenges traditional conceptions of who—and what—counts as human, while offering bold insights into the modernist project

Too often regarded as the macabre endpoint of life, the corpse is rarely discussed and largely kept out of the public eye. In The Modernist Corpse, Erin E. Edwards unearths the critically important but previously buried life of the corpse, which occupies a unique place between biology and technology, the living and the dead. Exploring the posthumous as the posthuman, Edwards argues that the corpse is central to understanding relations between the human and its “others,” including the animal, the machine, and the thing.

From photographs of lynchings to documentation of World War I casualties, the corpse is also central to the modernist project. Edwards turns critical attention to the corpse through innovative, posthumanist readings of canonical thinkers such as William Faulkner, Jean Toomer, W. E. B. Du Bois, Mina Loy, Djuna Barnes, and Gertrude Stein, offering new insights into the intersections among race, gender, technical media, and matter presumed to be dead. Edwards’s expansive approach to modernism includes diverse materials such as Hollywood film, experimental photography, autopsy discourses, and the comic strip Krazy Kat, producing a provocatively broad understanding of the modernist corpse and its various “lives.”

The Modernist Corpse both establishes important new directions for modernist inquiry and overturns common thought about the relationship between living and dead matter.

Erin E. Edwards is associate professor of English at Miami University in Ohio.