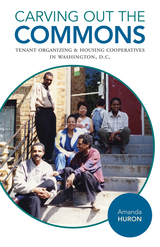 Provoked by mass evictions and the onset of gentrification in the 1970s, tenants in Washington, D.C., began forming cooperative organizations to collectively purchase and manage their apartment buildings. These tenants were creating a commons, taking a resource—housing—that had been used to extract profit from them and reshaping it as a resource that was collectively owned by them.

In Carving Out the Commons, Amanda Huron theorizes the practice of urban “commoning” through a close investigation of the city’s limited-equity housing cooperatives. Drawing on feminist and anticapitalist perspectives, Huron asks whether a commons can work in a city where land and other resources are scarce and how strangers who may not share a past or future come together to create and maintain commonly held spaces in the midst of capitalism. Arguing against the romanticization of the commons, she instead positions the urban commons as a pragmatic practice. Through the practice of commoning, she contends, we can learn to build communities to challenge capitalism’s totalizing claims over life.

Amanda Huron is assistant professor of interdisciplinary social sciences at the University of the District of Columbia.

Contents
Introduction
1. What Is the Commons? Merging Two Perspectives
2. The Urban Commons: Contradictions of Community, Capital, and the State
3. Forged in Crisis: Claiming a Home in the City
4. A Decent Grounds for Life: The Benefits of Limited-Equity Cooperatives
5. Survival and Collapse: Keeping and Losing Housing Over Time
6. Commoning in the Capitalist City
Conclusion
Acknowledgments
Bibliography
Index