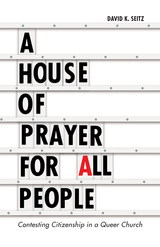 Perhaps an unlikely subject for an ethnographic case study, the Metropolitan Community Church of Toronto in Canada is a large predominantly LGBT church with a robust, and at times fraught, history of advocacy. While the church is often riddled with fault lines and contradictions, its queer and faith-based emphasis on shared vulnerability leads it to engage in radical solidarity with asylum-seekers, pointing to the work of affect in radical, coalition politics.

A House of Prayer for All People maps the affective dimensions of the politics of citizenship at this church. For nearly three years, David K. Seitz regularly attended services at MCCT. He paid special attention to how community and citizenship are formed in a primarily queer Christian organization, focusing on four contemporary struggles: debates on race and gender in religious leadership, activism around police–minority relations, outreach to LGBT Christians transnationally, and advocacy for asylum seekers. Engaging in debates in cultural geography, queer of color critique, psychoanalysis, and affect theory, A House of Prayer for All People stages innovative, reparative encounters with citizenship and religion.

Building on queer theory’s rich history of “subjectless” critique, Seitz calls for an “improper” queer citizenship—one that refuses liberal identity politics or national territory as the ethical horizon for sympathy, solidarity, rights, redistribution, or intimacy. Improper queer citizenship, he suggests, depends not only on “good politics” but also on people’s capacity for empathy, integration, and repair.

1. Too Diverse? Race, Gender, and Affect in Church

3. “Why Are You Doing This?” Desiring Queer Global Citizenship

4. From Identity to Precarity: Asylum, State Violence, and Alternative Horizons for Improper Citizenship