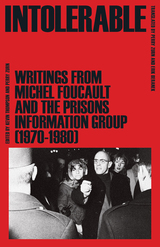 Founded by Michel Foucault and others in 1970–71, the Prisons Information Group (GIP) circulated information about the inhumane conditions within the French prison system. Intolerable makes available for the first time in English a fully annotated compilation of materials produced by the GIP during its brief but influential existence, including an exclusive new interview with GIP member Hélène Cixous and writings by Gilles Deleuze and Jean Genet.

These archival documents—public announcements, manifestos, reports, pamphlets, interventions, press conference statements, interviews, and round table discussions—trace the GIP’s establishment in post-1968 political turmoil, the new models of social activism it pioneered, the prison revolts it supported across France, and the retrospective assessments that followed its denouement. At the same time, Intolerable offers a rich, concrete exploration of Foucault’s concept of resistance, providing a new understanding of the arc of his intellectual development and the genesis of his most influential book, Discipline and Punish.

Michel Foucault (1926–1984) was a French historian and philosopher associated with the structuralist and poststructuralist movements; his writing has been widely influential throughout the humanities and social sciences. Among his most notable titles are History of Madness, Discipline and Punish, and The History of Sexuality.

Kevin Thompson is professor of philosophy at DePaul University. He is author of Hegel’s Theory of Normativity.

Perry Zurn is assistant professor of philosophy at American University. He is coeditor of Curiosity Studies: A New Ecology of Knowledge (Minnesota, 2020) and Active Intolerance: Michel Foucault, the Prisons Information Group, and the Future of Abolition.

Erik Beranek is a doctoral candidate in philosophy at DePaul University. His translations include Jacques Rancière’s Béla Tarr, the Time After and Étienne Souriau’s The Different Modes of Existence, both from Minnesota.