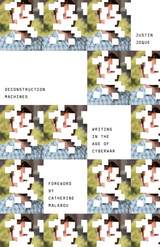 From shadowy attempts to steal state secrets to the explosive destruction of Iranian centrifuges, cyberwar has been a vital part of statecraft for nearly thirty years. But although computer-based warfare has been with us for decades, it has changed dramatically since its emergence in the 1990s, and the pace of change is accelerating.

In Deconstruction Machines, Justin Joque inquires into the fundamental nature of cyberwar through a detailed investigation of what happens at the crisis points when cybersecurity systems break down and reveal their internal contradictions. He concludes that cyberwar is best envisioned as a series of networks whose constantly shifting connections shape its very possibilities. He ultimately envisions cyberwar as a form of writing, advancing the innovative thesis that cyber attacks should be seen as a militarized form of deconstruction in which computer programs are systems that operate within the broader world of texts.

Throughout, Joque addresses hot-button subjects such as technological social control and cyber-resistance entities like Anonymous and Wikileaks while also providing a rich, detailed history of cyberwar. Deconstruction Machines provides a necessary new interpretation of deconstruction and timely analysis of media, war, and technology.

Justin Joque is the data visualization librarian at the University of Michigan.

Catherine Malabou is a philosopher and professor in the Philosophy Department at the Centre for Research in Modern European Philosophy at Kingston University, London.