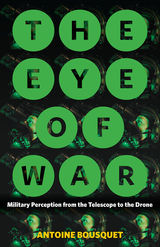 From ubiquitous surveillance to drone strikes that put “warheads onto foreheads,” we live in a world of globalized, individualized targeting. The perils are great. In The Eye of War, Antoine Bousquet provides both a sweeping historical overview of military perception technologies and a disquieting lens on a world that is, increasingly, one in which anything or anyone that can be perceived can be destroyed—in which to see is to destroy.

Arguing that modern-day global targeting is dissolving the conventionally bounded spaces of armed conflict, Bousquet shows that over several centuries, a logistical order of militarized perception has come into ascendancy, bringing perception and annihilation into ever-closer alignment. The efforts deployed to evade this deadly visibility have correspondingly intensified, yielding practices of radical concealment that presage a wholesale disappearance of the customary space of the battlefield. Beginning with the Renaissance’s fateful discovery of linear perspective, The Eye of War discloses the entanglement of the sciences and techniques of perception, representation, and localization in the modern era amid the perpetual quest for military superiority. In a survey that ranges from the telescope, aerial photograph, and gridded map to radar, digital imaging, and the geographic information system, Bousquet shows how successive technological systems have profoundly shaped the history of warfare and the experience of soldiering.

A work of grand historical sweep and remarkable analytical power, The Eye of War explores the implications of militarized perception for the character of war in the twenty-first century and the place of human subjects within its increasingly technical armature.

Antoine Bousquet is reader in international relations at Birkbeck, University of London. He is author of The Scientific Way of Warfare: Order and Chaos on the Battlefields of Modernity.