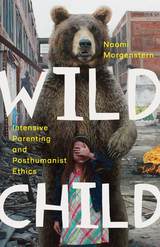 In the eighteenth century, Western philosophy positioned the figure of “the child” at the border between untamed nature and rational adulthood. Contemporary cultural anxieties about the ethics and politics of reproductive choice and the crisis of parental responsibility have freighted this liminal figure with new meaning in twenty-first-century narratives.

In Wild Child, Naomi Morgenstern explores depictions of children and their adult caregivers in extreme situations—ranging from the violence of slavery and sexual captivity to accidental death, mass murder, torture, and global apocalypse—in such works as Toni Morrison’s A Mercy, Cormac McCarthy’s The Road, Lionel Shriver’s We Need to Talk about Kevin, Emma Donoghue’s Room, and Denis Villeneuve’s film Prisoners. Morgenstern shows how, in such narratives, “wild” children function as symptoms of new ethical crises and existential fears raised by transformations in the technology and politics of reproduction and by increased ethical questions about the very decision to reproduce. In the face of an uncertain future that no longer confirms the confidence of patriarchal humanism, such narratives displace or project present-day apprehensions about maternal sacrifice and paternal protection onto the wildness of children in a series of hyperbolically violent scenes.

Urgent and engaging, Wild Child offers the only extended consideration of how twenty-first-century fiction has begun to imagine the decision to reproduce and the ethical challenges of posthumanist parenting.

Naomi Morgenstern is associate professor of English at the University of Toronto.

Contents
Introduction: The Posthumanist Wild Child
1. Is There a Space of Maternal Ethics? Emma Donoghue’s Room
2. Postapocalyptic Responsibility: Patriarchy at the End of the World in Cormac McCarthy’s The Road
3. Maternal Love/Maternal Violence: Inventing Ethics in Toni Morrison’s A Mercy
4. “Monstrous Decision”: Destruction and Relation in Lionel Shriver’s We Need to Talk about Kevin
5. “Dis-ap-peared”: Endangered Children in Denis Villeneuve’s Prisoners and Alice Munro’s “Miles City, Montana”
Afterword: The Pretense of the Human from Victor of Aveyron to Nim Chimpsky
Acknowledgments
Notes
Index