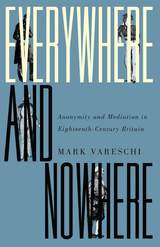 A fascinating analysis of anonymous publication centuries before the digital age

Everywhere and Nowhere considers the ubiquity of anonymity and mediation in the publication and circulation of eighteenth-century British literature—before the Romantic creation of the “author”—and what this means for literary criticism. Anonymous authorship was typical of the time, yet literary scholars and historians have been generally unable to account for it as anything more than a footnote or curiosity.

Mark Vareschi shows the entangled relationship between mediation and anonymity, revealing the nonhuman agency of the printed text. Drawing richly on quantitative analysis and robust archival work, Vareschi brings together philosophy, literary theory, and media theory in a trenchant analysis, uncovering a history of textual engagement and interpretation that does not hinge on the known authorial subject.

In discussing anonymous poetry, drama, and the novel along with anonymously published writers such as Daniel Defoe, Frances Burney, and Walter Scott, he unveils a theory of mediation that renews broader questions about agency and intention. Vareschi argues that textual intentionality is a property of nonhuman, material media rather than human subjects alone, allowing the anonymous literature of the eighteenth century to speak to contemporary questions of meaning in the philosophy of language. Vareschi closes by exploring dubious claims about the death of anonymity and the reexplosion of anonymity with the coming of the digital. Ultimately, Everywhere and Nowhere reveals the long history of print anonymity so central to the risks and benefits of the digital culture.

Mark Vareschi is assistant professor of English at the University of Wisconsin–Madison.