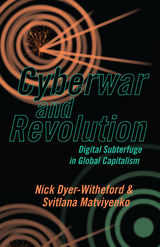 Uncovering the class conflicts, geopolitical dynamics, and aggressive capitalism propelling the militarization of the internet

Global surveillance, computational propaganda, online espionage, virtual recruiting, massive data breaches, hacked nuclear centrifuges and power grids—concerns about cyberwar have been mounting, rising to a fever pitch after the alleged Russian hacking of the U.S. presidential election and the Cambridge Analytica scandal. Although cyberwar is widely discussed, few accounts undertake a deep, critical view of its roots and consequences.

Analyzing the new militarization of the internet, Cyberwar and Revolution argues that digital warfare is not a bug in the logic of global capitalism but rather a feature of its chaotic, disorderly unconscious. Urgently confronting the concept of cyberwar through the lens of both Marxist critical theory and psychoanalysis, Nick Dyer-Witheford and Svitlana Matviyenko provide a wide-ranging examination of the class conflicts and geopolitical dynamics propelling war across digital networks.

Investigating the subjectivities that cyberwar mobilizes, exploits, and bewilders, and revealing how it permeates the fabric of everyday life and implicates us all in its design, this book also highlights the critical importance of the emergent resistance to this digital militarism—hacktivism, digital worker dissent, and off-the-grid activism—for effecting different, better futures.

Nick Dyer-Witheford is associate professor in the Faculty of Information and Media Studies at University of Western Ontario. His books include Cyber-Proletariat: Global Labour in the Digital Vortex and Games of Empire: Global Capitalism and Video Games (Minnesota, 2009).

Svitlana Matviyenko is assistant professor in the School of Communication at Simon Fraser University. She is coeditor of The Imaginary App and Lacan and the Posthuman.

Contents
Introduction: You May Not Be Interested in Cyber-War …
1. The Geopolitical and Class Relations of Cyber-War
2. Cyber-War’s Subjects
3. What Is to Be Done?
Acknowledgments
Notes
Bibliography
Index