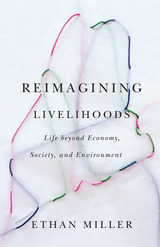 Much of the debate over sustainable development revolves around how to balance the competing demands of economic development, social well-being, and environmental protection. “Jobs vs. environment” is only one of the many forms that such struggles take. But what if the very terms of this debate are part of the problem? Reimagining Livelihoods argues that the “hegemonic trio” of economy, society, and environment not only fails to describe the actual world around us but poses a tremendous obstacle to enacting a truly sustainable future.

In a rich blend of ethnography and theory, Reimagining Livelihoods engages with questions of development in the state of Maine to trace the dangerous effects of contemporary stories that simplify and domesticate conflict. As in so many other places around the world, the trio of economy, society, and environment in Maine produces a particular space of “common sense” within which struggles over life and livelihood unfold. Yet the terms of engagement embodied by this trio are neither innocent nor inevitable. It is a contingent, historically produced configuration, born from the throes of capitalist industrialism and colonialism. Drawing in part on his own participation in the struggle over the Plum Creek Corporation’s “concept plan” for a major resort development on the shores of Moosehead Lake in northern Maine, Ethan Miller articulates a rich framework for engaging with the ethical and political challenges of building ecological livelihoods among diverse human and nonhuman communities.

In seeking a pathway for transformative thought that is both critical and affirmative, Reimagining Livelihoods provides new frames of reference for living together on an increasingly volatile Earth.

Ethan Miller is lecturer in environmental studies, politics, and anthropology at Bates College.