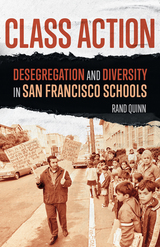 A compelling history of school desegregation and activism in San Francisco

San Francisco’s story provides a critical chapter in the history of American school discrimination and the complicated racial politics that emerged. It was among the first large cities outside the South to face court-ordered desegregation following the Brown rulings, and it experienced the same demographic shifts that transformed other cities throughout the urban West. Rand Quinn argues that the district’s student assignment policies—including busing and other desegregative mechanisms—began as a remedy for state discrimination but transformed into a tool intended to create diversity. Drawing on extensive archival research—from court docket files to school district records—Quinn describes how this transformation was facilitated by the rise of school choice, persistent demand for neighborhood schools, evolving social and legal landscapes, and local community advocacy and activism.

Class Action is the first book to present a comprehensive political history of post-Brown school desegregation in San Francisco. Quinn illuminates the evolving relationship between jurisprudence and community-based activism and brings a deeper understanding to the multiracial politics of urban education reform. He responds to recent calls by scholars to address the connections between ideas and policy change and ultimately provides a fascinating look at race and educational opportunity, school choice, and neighborhood schools in the aftermath of Brown v. Board of Education.

Rand Quinn is associate professor of education at the University of Pennsylvania.