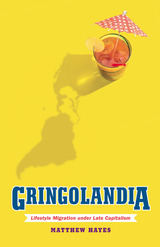 A telling look at today’s “reverse” migration of white, middle-class expats from north to south, through the lens of one South American city

Even as the “migration crisis” from the Global South to the Global North rages on, another, lower-key and yet important migration has been gathering pace in recent years—that of mostly white, middle-class people moving in the opposite direction. Gringolandia is that rare book to consider this phenomenon in all its complexity.

Matthew Hayes focuses on North Americans relocating to Cuenca, Ecuador, the country’s third-largest city and a UNESCO World Heritage Site. Many began relocating there after the 2008 economic crisis. Most are self-professed “economic refugees” who sought offshore retirement, affordable medical care, and/or a lower–cost location. Others, however, sought adventure marked by relocation to an unfamiliar cultural environment and to experience personal growth through travel, illustrative of contemporary cultures of aging. These life projects are often motivated by a desire to escape economic and political conditions in North America.

Regardless of their individual motivations, Hayes argues, such North–South migrants remain embedded in unequal and unfair global social relations. He explores the repercussions on the host country—from rising prices for land and rent to the reproduction of colonial patterns of domination and subordination. In Ecuador, heritage preservation and tourism development reflect the interests and culture of European-descendent landowning elites, who have most to benefit from the new North–South migration. In the process, they participate in transnational gentrification that marginalizes popular traditions and nonwhite mestizo and indigenous informal workers. The contrast between the migration experiences of North Americans in Ecuador and those of Ecuadorians or others from such regions of the Global South in North America and Europe demonstrates that, in fact, what we face is not so much a global “migration crisis” but a crisis of global social justice.

Matthew Hayes is the Canada Research Chair in Global and International Studies at St. Thomas University in Fredericton, New Brunswick.