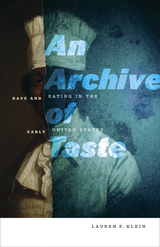 There is no eating in the archive. This is not only a practical admonition to any would-be researcher but also a methodological challenge, in that there is no eating—or, at least, no food—preserved among the printed records of the early United States. Synthesizing a range of textual artifacts with accounts (both real and imagined) of foods harvested, dishes prepared, and meals consumed, An Archive of Taste reveals how a focus on eating allows us to rethink the nature and significance of aesthetics in early America, as well as of its archive.

Lauren F. Klein considers eating and early American aesthetics together, reframing the philosophical work of food and its meaning for the people who prepare, serve, and consume it. She tells the story of how eating emerged as an aesthetic activity over the course of the eighteenth century and how it subsequently transformed into a means of expressing both allegiance and resistance to the dominant Enlightenment worldview. Klein offers richly layered accounts of the enslaved men and women who cooked the meals of the nation’s founders and, in doing so, directly affected the development of our national culture—from Thomas Jefferson’s emancipation agreement with his enslaved chef to Malinda Russell’s Domestic Cookbook, the first African American–authored culinary text.

The first book to examine the gustatory origins of aesthetic taste in early American literature, An Archive of Taste shows how thinking about eating can help to tell new stories about the range of people who worked to establish a cultural foundation for the United States.

Lauren F. Klein is associate professor in the departments of English and Quantitative Theory and Methods at Emory University. She is coeditor of the Debates in Digital Humanities series at Minnesota.

Introduction: No Eating in the Archive

1. Taste: Eating and Aesthetics in the Early Republic

3. Satisfaction: Aesthetics, Speculation, and the Theory of Cookbooks

4. Imagination: Food, Fiction, and the Limits of Taste

5. Absence: Slavery and Silence in the Archive of Eating