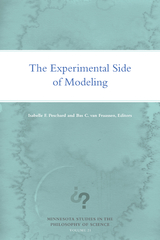 An innovative, multifaceted approach to scientific experiments as designed by and shaped through interaction with the modeling process

The role of scientific modeling in mediation between theories and phenomena is a critical topic within the philosophy of science, touching on issues from climate modeling to synthetic models in biology, high energy particle physics, and cognitive sciences. Offering a radically new conception of the role of data in the scientific modeling process as well as a new awareness of the problematic aspects of data, this cutting-edge volume offers a multifaceted view on experiments as designed and shaped in interaction with the modeling process.

Contributors address such issues as the construction of models in conjunction with scientific experimentation; the status of measurement and the function of experiment in the identification of relevant parameters; how the phenomena under study are reconceived when accounted for by a model; and the interplay between experimenting, modeling, and simulation when results do not mesh. Highlighting the mediating role of models and the model-dependence (as well as theory-dependence) of data measurement, this volume proposes a normative and conceptual innovation in scientific modeling—that the phenomena to be investigated and modeled must not be precisely identified at the start but specified during the course of the interactions arising between experimental and modeling activities.

Contributors: Nancy D. Cartwright, U of California, San Diego; Anthony Chemero, U of Cincinnati; Ronald N. Giere, U of Minnesota; Jenann Ismael, U of Arizona; Tarja Knuuttila, U of South Carolina; Andrea Loettgers, U of Bern, Switzerland; Deborah Mayo, Virginia Tech; Joseph Rouse, Wesleyan U; Paul Teller, U of California, Davis; Michael Weisberg, U of Pennsylvania; Eric Winsberg, U of South Florida.