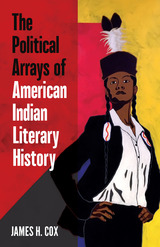 Bringing fresh insight to a century of writing by Native Americans

The Political Arrays of American Indian Literary History challenges conventional views of the past one hundred years of Native American writing, bringing Native American Renaissance and post-Renaissance writers into conversation with their predecessors. Addressing the political positions such writers have adopted, explored, and debated in their work, James H. Cox counters what he considers a “flattening” of the politics of American Indian literary expression and sets forth a new method of reading Native literature in a vexingly politicized context.

Meticulously researched, The Political Arrays of American Indian Literary History represents a compelling case for reconceptualizing the Native American Renaissance as a literary–historical constellation. By focusing on post-1968 Native writers and texts, argues Cox, critics have often missed how earlier writers were similarly entangled, hopeful, frustrated, contradictory, and unpredictable in their political engagements.

James H. Cox is Jane and Roland Blumberg Centennial Professor of English at the University of Texas at Austin. He is author of The Red Land to the South: American Indian Writers and Indigenous Mexico (Minnesota, 2012).