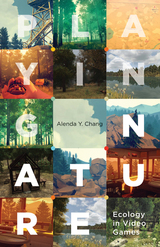 Video games may be fun and immersive diversions from daily life, but can they go beyond the realm of entertainment to do something serious—like help us save the planet? As one of the signature issues of the twenty-first century, ecological deterioration is seemingly everywhere, but it is rarely considered via the realm of interactive digital play. In Playing Nature, Alenda Y. Chang offers groundbreaking methods for exploring this vital overlap.

Arguing that games need to be understood as part of a cultural response to the growing ecological crisis, Playing Nature seeds conversations around key environmental science concepts and terms. Chang suggests several ways to rethink existing game taxonomies and theories of agency while revealing surprising fundamental similarities between game play and scientific work.

Alenda Y. Chang is associate professor of film and media studies at the University of California, Santa Barbara. She is cofounder of Wireframe, a digital media studio fostering creative pedagogy, research, and design aligned with issues of social and environmental justice.