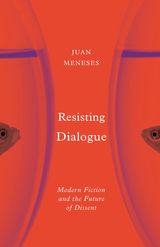 Is dialogue always the productive political and communicative tool it is widely conceived to be? Resisting Dialogue reassesses our assumptions about dialogue and, in so doing, about what a politically healthy society should look like. Juan Meneses argues that, far from an unalloyed good, dialogue often serves as a subtle tool of domination, perpetuating the underlying inequalities it is intended to address.

Meneses investigates how “illusory dialogue” (a particular dialogic encounter designed to secure consensus) is employed as an instrument that forestalls—instead of fostering—articulations of dissent that lead to political change. He does so through close readings of novels from the English-speaking world written in the past hundred years—from E. M. Forster’s A Passage to India and Jeanette Winterson’s The Passion to Indra Sinha’s Animal’s People and more. Resisting Dialogue demonstrates how these novels are rhetorical exercises with real political clout capable of restoring the radical potential of dialogue in today’s globalized world. Expanding the boundaries of postpolitical theory, Meneses reveals how these works offer ways to practice disagreement against this regulatory use of dialogue and expose the pitfalls of certain other dialogic interventions in relation to some of the most prominent questions of modern history: cosmopolitanism at the end of empire, the dangers of rewriting the historical record, the affective dimension of neoliberalism, the racial and nationalist underpinnings of the “war on terror,” and the visibility of environmental violence in the Anthropocene.

Ultimately, Resisting Dialogue is a complex, provocative critique that, melding political and literary theory, reveals how fiction can help confront the deployment of dialogue to preempt the emergence of dissent and, thus, revitalize the practice of emancipatory politics.

Juan Meneses is assistant professor of English at the University of North Carolina at Charlotte.