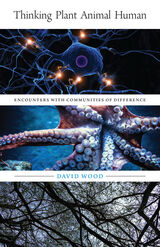 There is a revolution under way in our thinking about animals and, indeed, life in general, particularly in the West. The very words man, animal, and life have turned into flimsy conceptual husks—impediments to thinking about the issues in which they are embroiled. David Wood was a founding member of the early 1970s Oxford Group of philosophers promoting animal rights; he also directed Ecology Action (UK). Thinking Plant Animal Human is the first collection of this major philosopher’s influential essays on “animals,” bringing together his many discussions of nonhuman life, including the classic “Thinking with Cats.”

Exploring our connections with cats, goats, and sand crabs, Thinking Plant Animal Human introduces the idea of “kinnibalism” (the eating of mammals is eating our own kin), reflects on the idea of homo sapiens, and explores the place of animals both in art and in children’s stories. Finally, and with a special focus on trees, the book delves into remarkable contemporary efforts to rescue plants from philosophical neglect and to rethink and reevaluate their status. Repeatedly bubbling to the surface is the remarkable strangeness of other forms of life, a strangeness that extends to the human.

Wood shows that the best way of resisting simplistic classification is to attend to our manifold relationships with other living beings. It is not anthropocentric to focus on such relationships; they cast light in complex ways on the living communities of which we are part, and exploring them recoils profoundly on our understanding of ourselves.

David Wood is W. Alton Jones Professor of Philosophy at Vanderbilt University, where he teaches continental and environmental philosophy. His many books include Deep Time, Dark Times: On Being Geologically Human; Reoccupy Earth: Notes toward an Other Beginning; and Eco-Deconstruction: Derrida and Environmental Philosophy, which he coedited. He is director of Yellow Bird Artscape in Tennessee.

3. Trees and Truth: Our Uncanny Arboreality

5. On Track for Terratoriality: Of Goats and Men

6. The Absent Animal: Mirror Infractions in the Yucatan

7. Kinnibalism, Cannibalism: Stepping Back from the Plate

8. Creatures from Another Planet

10. The Truth about Animals I: Jamming the Anthropological Machine

11. The Truth about Animals II: “Noblesse Oblige” and the Abyss

12.  Giving Voice to Other Beings

13. Toxicity and Transcendence: Two Faces of the Human